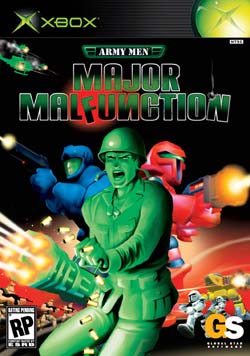 This is a direct order: Defeat Major Malfunction at all costs!

Take control of your plastic soldiers in Army Men: Major Malfunction and destroy every psycho toy-gone-mad in your path. Don't let Sarge's meltdown hinder your mission, soldier. Unleash your weaponry—flamethrowers, shotguns, and M-16s. Do not fail. Hoo-rah!