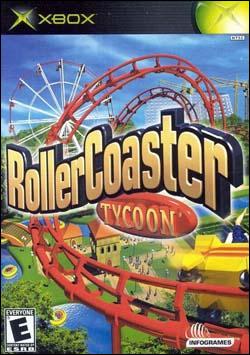 Despite being called RollerCoaster Tycoon, the Xbox version also includes both add-ons. This is the first release on that platform.

Rollercoaster Tycoon is a real-time isometric amusement park simulation, in which the player takes the role of a theme park manager, creating rides and attractions to amuse his guests, as well as shops and stalls in case the guests are hungry.

Ride stats differ, with some being gentle and meant for "waking up" tired guests, and others being rather intense. Each and every guest has his own excitement and nausea tolerance, which will reflect on the rides' popularity and the park's tidiness. Hence, handymen are employed. Rides can also break down, and some of them can even crash, leading to a tragic ending. Mechanics can be employed to inspect rides for possible errors and to fix already broken rides. Security guards prevent vandalism in their line of sight, and entertainers keep guests happy while waiting in a long queue line.

Guests are also impressed if there is some wonderful scenery scattered around the park, leading to an increase in the park rating. They all have their opinion on the park, so it is a good idea to check their thoughts every now and then, as the park rating depends on the guests' satisfaction.

All these features require money. Loan can be raised from a bank, but the more one borrows, the more the bank asks in return. Certain rides, or even the park itself, can also be advertised, while vouchers are also available for discounts or free rides or food.