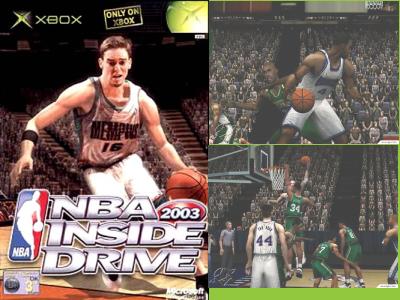 Last year NBA Inside Drive 2002 from High Voltage shocked us with a great mix of arcade and simulation play. The only apparent missing ingredient was a franchise mode. A new basketball season is about to begin and Drive returns in 2003 form offering a Dynasty Mode, some post-up dekes, and Kenny "The Jet" Smith-added smack talk. What's missing though is any online functionality whatsoever, which is a big disappointment from a first-party game. And as much as we loved Drive last year, it feels a little weak this year against the competition. Little has really changed and Drive is in danger of slipping into oblivion if big things don't come next year.

Gameplay If you enjoyed Drive last year, you won't find too much different this time around. Only a small smattering of new gameplay additions have been added, including on-the-fly play-calling and minor touches to the post-up game. So while the game plays much like last year, which was an enjoyable in-your-face NBA experience, it seems a little worn out. With NBA 2K3 and NBA Live 2003 making sizable additions to their gameplay, Drive is being left behind. Yes, the game was a lot of fun last year, but that doesn't mean there weren't some things that could have seen an upgrade. And unfortunately, Drive chooses to toe the gameplay line, with the only significant addition being the franchise mode, which should be in every sports game anyway.

If that seems a bit overly-harsh, keep in mind that sports games come out yearly. Companies expect you to pay $50 every year for another edition. The Dynasty Mode certainly adds value, but as you'll see, the majority of the game was barely touched up by High Voltage.

NBA Inside Drive 2003 is definitely your game if you don't want the simmy aspects of 2K3 or the over-the-top arcade feel of Live. It's the happy medium. While Drive has plenty of arcade aspects including some great smack talk and plenty of drives to the hoop, the AI is tuned intelligently to provide touches of the real NBA experience. You'll be able to see and recognize plays developing and pressure will increase depending on the game situation. The computer AI will throw into the post, get double-teamed and kick out for an open three-pointer. While it's not sim-perfection it's the kind of balance a lot of gamers will enjoy. Many people ask for a sim, but it's not what they actually want.

Last year's post game was decent, but this year it's been slightly improved with the addition of post moves. Now while holding down the Left Trigger you can push back soft or hard on the defender, step out and shoot, or perform a hook shot. It's a good start, but battles in the post aren't terribly exciting here. There's not a lot of fighting for position and you just don't feel enough pressure in the post. The name is Inside Drive for a reason, and driving the lane will likely be your main point-grabber. That's not to say the post game is obsolete, because it's certainly a good way to score points down low (and probably the best area for defense), but there needs to be some more value added to the post game.

Plays can be called on the fly with the D-Pad, but like NBA 2K3, plays are all very specific. With a more arcade experience, the game needs to be less about the X and the O and focus on fast and easy. The D-Pad play-calling can be very helpful is with defensive pressure. You can set multiple levels of defense, including the type of defensive intensity and defensive coverage. Up, down, left, and right on the D-Pad open a different menu each with four selectable options (chosen by using the D-Pad). It takes you about two seconds to switch to a full court press and then just as quickly you can revert to man-to-man coverage.

Sliders have been included this year to allow you to adjust human and AI performance. You can affect the following things: Player speed, blocks, steals, two-pointers, three-pointers, free throws, dunks, dekes, and hook shots. The first thing you will almost certainly want to do is push the player speed way up, because the default speed is a bit too slow. In fact, I wasn't loving Drive at all until I got the speed going. Don't be shy, and pump it up.

Penalties, which were a bit out of hand last year, can be adjusted in a different menu and set to off, lenient, normal, or strict. While the default normal mode will, in the end, give you the most realistic number of fouls, many of those will feel bogus. There are some minor collision detection problems so when trying to move past someone, just trying to get down court on defense, the game will knock the other player down and hit you with a pushing foul. A lot of fouls are difficult to see and seem a bit cheap. So, even though you'll have less fouls than in a realistic basketball game, going down to lenient will likely help make the game more enjoyable.